Ten years ago today the world watched in horror as the events of 9/11 unfolded. At the time I was in Sardinia, where I had been finishing work on a BBC documentary special for the Meet the Ancestors series about the possible links between malaria and the fall of the Roman Empire. The following is my diary entry for the day... 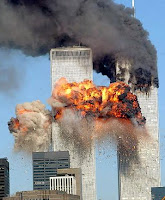 Today I saw the most horrifying event ever on the TV. It may lead to war. Having checked out of our hotel and then done some shopping in Olbia, we flew back to Rome in order to catch a plane to London. Andrew, who had lost his luggage on the way to Olbia two weeks ago, decided to check our luggage only as far as Rome, instead of Heathrow, in order to then recheck it at Rome. It was a mistake. Getting all our equipment from baggage reclaim took forever, so much so that we ended up missing the flight. We were forced to re-book onto the 6.25pm (Italian time), which was bad news as I could no longer get a connecting flight on to Glasgow. I was livid, but the next events soon put everything into perspective.

I called Claire to tell her what had happened. Within seconds she asked me if I had seen the news - two planes had been hijacked and forcibly crashed into the two towers of the World Trade Centre in New York City.

I immediately called all the crew together and we headed for a TV set in a nearby cafe in the airport. Although the commentary was in Italian, the images were from CNN. The event had literally happened 20 minutes ago, and the two planes had crashed 18 minutes apart. The second crash had been filmed and the programme kept repeating the clip. It was horrifying. One of the Italians watching with us could speak English, and she translated the commentary for us.

Things were getting even worse. A car bomb blew up outside the Defence Department in Washington DC, and shortly after a third plane crashed into the Pentagon building. Shortly after that, a fourth plane crashed just south of Pittsburgh in Pennsylvania. The nightmare continued to worsen, when the two towers in Manhattan collapsed. It is believed the death toll could be as much as 20,000. It's like something from the movie "Independence Day". We just watched gobsmacked. Neil called us from Glasgow to see how we all were, and to find out if we were going to have a problem getting home. Everything still seemed to be OK for our travel plans, but Rome was now on an alert, in case a terrorist attack was imminent on their US air base nearby.

We boarded the plane at 6.15, but immediate security precautions regarding re-routed flight paths into London (to avoid flying over the city) meant that we could not depart until 8.30. On the plane Andrew and I discovered that the passenger sitting beside us was about to start working at the BBC next Monday, so we gave her an insiders' view on the corporation.

We finally got to London for about 11.00, where we learned that all flights to the US had been cancelled. With no hotel rooms available, due to the number of stranded Americans, I ended up going to Geoff's house in Ealing, where he kindly offered to put me up for the night. We got there for midnight, and eating an Indian meal we watched BBC News 24 for two and a half hours, silently, as we were really shocked at what was happening. It seems that 250 firemen may have been in the World Trade Centre as it collapsed. Dante had nothing on this. And an amateur cameraman managed to catch the first plane crash. It was like a missile, the speed it was doing. I went to sleep at 2.30am on Geoff's couch.

Remembering all 2,977 killed by the hijackers, including 67 Britons, and the 411 emergency workers who died heroically in the United States of America.
Posted by Chris Paton at 05:29 2 comments: