The election count in North Ayrshire

On Thursday evening, May 5th, I had the privilege to attend the count at Saint Matthew's Academy in Saltcoats for the 2016 Scottish election, as one of three representatives from the Largs branch of the Scottish National Party (www.snp.org and www.facebook.com/SNPLargs), with my colleagues Linda Nicholson and Davina McTiernan. This was my third election count (my previous visits being to the 2014 independence referendum count, and last year's General Election count, both at the same venue). The following is a brief overview of what happened on that night, but more generally, I hope it provides a glimpse of what actually happens at such counts in general.

Although the count starts at 10pm, it usually takes a while for things to pick up, with one of the first duties being to bring in the votes from the polling stations (as well as those already cast by post) to the centre, and so I arrived at 11pm. After receiving a security band for my wrist at the main entrance, I made my way into the hall to find that the votes were still being verified, before the main count and allocation of votes to each party began.

In the Scottish Holyrood elections, there are two votes - the 'constituency vote', and the 'list vote'. The first sees 73 candidates elected to become MSPs (Members of the Scottish Parliament) through a simple 'first past the post' system, as with the Westminster elections (for the UK wide parliament based in the south of England). The remaining 56 seats for the parliament are decided by the 'list' vote, with 7 seats allocated in each of 8 separate regions across the country. The way that these seats are decided is much more complicated, but essentially uses proportional representation, employing what is known as the D'Hondt system to work out who should get what and where. It is very complicated, but in essence the list vote compensates parties who have lost out in the constituency vote, by rebalancing the make up of the parliament closer to the lines of how people have caste their votes proportionately on a national basis.

In this venue, two constituency votes in Ayrshire were up for grabs - Cunninghame South and Cunninghame North, the latter being the one I was particularly interested in, hoping to see our candidate Kenneth Gibson returned for another term. To cater for the two votes, the main sports hall was essentially divided into two halves, with the Cunninghame North count taking place at the end where the declarations would eventually be made, and Cunninghame South at the other end. In each half there were several tables with groups of counters seated on both sides. As attendees we were allowed to walk around both ends of the hall, and in between the two constituency halves, as the process took place in full transparency. The first part of the process doesn't allow you to see who is winning quite yet, although several members of each party in attendance were standing by various counting stations trying to gain a glimpse of votes cast, which they recorded on rough notes in statistical tallies - the odd glimpse of an X beside SNP on a ballot here, another beside the Conservatives there, another for Labour, etc. It is a crude way to gain a rough statistical sample, but from our perspective gave us an early confidence boost as it looked as if we were doing quite well. 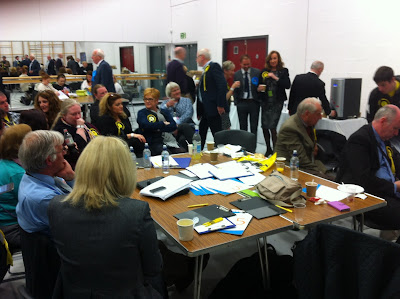 SNP group in the hospitality room

The process takes some time, and so a separate room was available for all attending to grab a coffee or a bite to eat, and to watch the results coming in nationwide across Scotland on three large televisions. Although TV coverage had started at 10.30pm, there was not a lot that could be said by the commentators until the declarations were made, and the first of these was not expected until 1am. In this room members of the parties talk to one another in their own core groups, mingle with the press, and even chat with their opponents - whilst the daily barrage of campaigning can be quite brutal, with the polls closed conversations between parties can be quite light-hearted (at this point we were all there for one purpose). In here I managed to speak to Dr Philippa Whitford of the SNP for the first time, to whom I joked that there weren't enough Northern Irish folk in the party (I'm also from NI!), and managed to catch up with a few councillors, including a quick chat with several from the SNP, and the sole North Ayrshire Conservative councillor Tom Marshall. There were very few Labour folk there, but it was notable that a few folk from the Green Party were present. I also spoke to Calum Corral from the local Largs newspaper, who had set up a live blog feed for his readers (www.largsandmillportnews.com/news/14474763.Scottish_Parliament_election_LIVE/). Calum had recently returned from a great trip to Chicago, and I had also just been away for a couple of weeks to Canada on a lecture tour - the conversation ended up with us both lamenting the fact we missed the appearance of a whale in the waters between Largs and Cumbrae in recent days (he showed me the video clip on his phone!)!

With the verification completed (Cunninghame South ahead of Cunninghame North), the tables for the counters were rejigged with the addition of boxes designed to place the votes for each party into dedicated slots, in preparation for the main count. This kicked off at about 1am, at which point some of the national results were beginning to come in. It is initially frustrating to get a sense of how each party is doing, as it takes a time before the bundles in each slot are large enough to see who might be ahead, but it soon became clear that our man Kenny looked to be doing well, as did our colleague Ruth Maguire, standing for the SNP in Cunninghame South.

After observing the process for half an hour or so, I returned to the waiting area, and bumped into Jamie Greene, our Conservative opponent in Cunninghame North, with whom I had a quick chat. Jamie had just learned that his Conservative colleague Jackson Carlaw had taken a constituency seat in Eastwood. This had a major impact on his own situation, in that with Carlaw having previously been number one on the Tory list, he was now off it - meaning that Jamie was now pushed up to first place on the list, having previously been second. This dramatically improved his chances of being elected to Holyrood as a list MSP - even if he lost the constituency vote - which was beginning to look likely from the count. The complexities of our electoral system!

Our own candidate Kenny Gibson was of course present, as was his wife, our local MP Patricia Gibson, and we all chatted in the waiting area as we watched what was turning out to be another great night for the SNP, albeit one with a few surprises. As we were watching the TV, our party leader Nicola Sturgeon was shown making her way to the Glasgow count, of particular interest to her mother Joan, who was watching with us, she being a local councillor in North Ayrshire, as well as our current Provost. 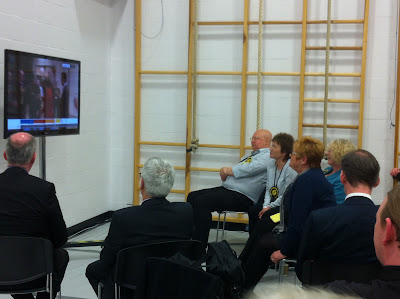 Just after 3am, Kenny gave us the heads up that the declaration was likely to be in about half an hour. I went into the hall just as we were invited to view the decisions as to the validity of some of the ballots which had been spoiled. Although you must put an X in the box of choice, there are some exceptions as to what can and cannot be allowed. If an X is not completely within a box, for example, and overlaps the boundaries, it can still be valid if the two intersecting lines of the X are located within the box. Ballots with nothing marked on them are rejected, whilst others that are deliberately spoiled (occasionally humorously, occasionally obscenely) are usually rejected. However, the decision on each is done in full public gaze of observers from all parties, and objections can be noted to the decisions made by the election officers, although I didn't see anyone do so.

The declarations were finally made just prior to 4am, by Elma Murray, the returning officer and chief executive of North Ayrshire Council. First up was Ruth Maguire, who was well-deservedly voted in as the SNP MSP for Cunninghame South, to great cheers from the party. (The full result is at www.bbc.co.uk/news/politics/scotland-constituencies/S16000095). 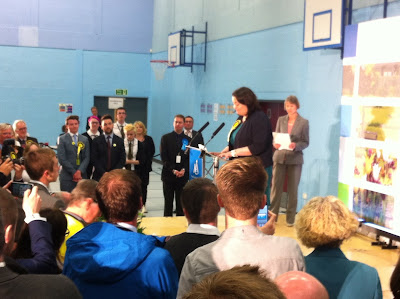 After hearing Ruth's acceptance speech, and that of her defeated opponents, it was time for the Cunninghame North declaration. Once again, our man Kenny Gibson was returned as the SNP MSP for the region, and gave a short acceptance speech, thanking his electoral agent Linda Nicholson, his campaign co-ordinator Alan Dickson, his wife Patricia, and all the constituency volunteers who had helped to get him re-elected. Job done! (The full result is at www.bbc.co.uk/news/politics/scotland-constituencies/S16000094)

Following the defeated opponent's speeches, we then all posed for press photographs with our victor, and of course, I grabbed a couple of pics for the moment also! By now it was passed 4am - but the night was young! We said our goodbyes to each other, then made our way to our respective homes to watch the unfurling drama. 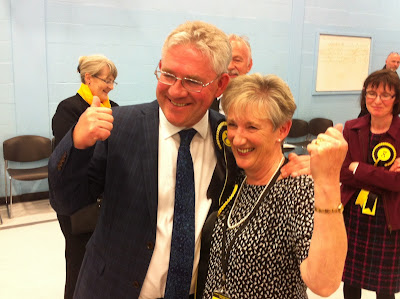 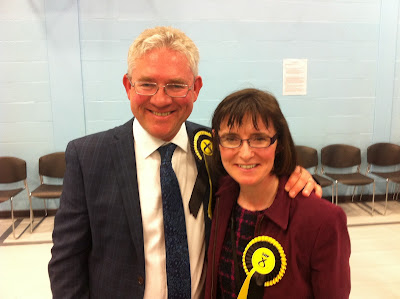 The constituency votes sorted, the ballots for the list vote, which had to include results from several regions in the west of Scotland, were subsequently worked on at a counting centre in Braehead to decide the remaining 'list MSPs'. Our Conservative opponent Jamie Greene was duly elected at this stage, but not our Labour or LibDem candidates, who did not garner anything like enough support. Overall, the SNP was returned for a historic third successive term as the government, and became the first party since devolution to amass more than one million votes for a Holyrood election - not bad for a night's work! The Tories also historically overtook Labour to become the official opposition. The next five years will be fascinating to watch - as will the local council elections next year! 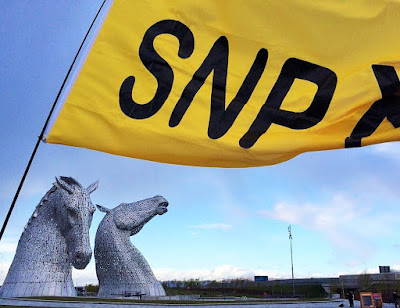 Chris
Posted by Chris Paton at 09:11 No comments: