Rally for Remain - Northern Ireland said Yes to the EU

On Saturday 20th October 2018 I took a ferry from Scotland for a day trip to Belfast, in order that I could attend the Rally For Remain at City Hall. This was the first time that I had ever attended a political rally in Northern Ireland, but in the current shenanigans over Brexit I felt it was important to show solidarity with the many folk in my native country who, like me, had also voted to Remain in the European Union, and who are about to be well and truly shafted. 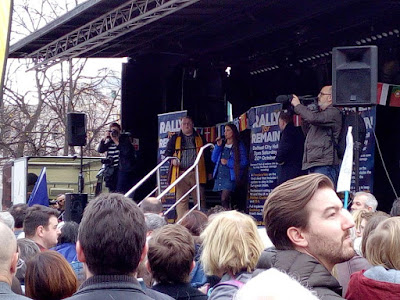 What the Brexiteers in Britain do not get, and certainly would not care about if they did, is that in Northern Ireland, and indeed in Ireland as a whole, Brexit will come at a price. When the Tories achieve their 'hard Brexit', a border will be introduced in Ireland between the European Union and Little Britain's last colony, Northern Ireland. It will be physical infrastructure of a sort, but much worse, there is the very real danger of a 'hard border' becoming reintroduced into the minds of those who can never be reconciled to peace and prosperity. 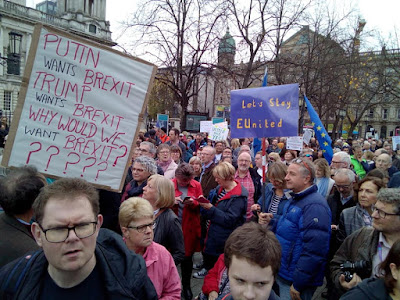 Northern Ireland, like Scotland, voted against Brexit. The DUP, which only currently has influence because Theresa May screwed up her Conservative majority through an unnecessary general election in 2017, want to see this hard border, but they do not speak for the majority of people in Northern Ireland. For the DUP, Brexit will recreate a 'them and us' scenario from which they see future electoral advantage, something the deeply tribal Northern Ireland and Ireland was previously trapped in for decades and centuries, and which everyone finally learned to escape from through the Good Friday Agreement - except the DUP, who did not sign it. There is an entire generation of people in the north now who can vote who were not even alive during the Troubles, and the DUP is willing to put them on a sacrificial altar. It is disgusting. It is wrong. It is undemocratic. And it is not about orange versus green. 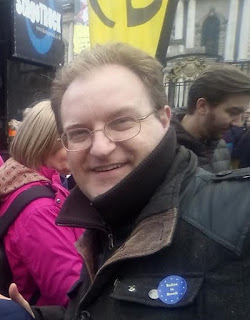 I am not religious. I originally come from a mainly Protestant background in Northern Ireland, but Brexit is the one disaster that has convinced me that the UK will forever be our undoing, whether in Scotland, where I now live, or back home. I now have dual nationality between Ireland and the UK, and when Scotland becomes independent in the very near future, I will be giving up my UK passport, and taking a Scottish one instead. Britain is permanently broken, the tragedy is that on their final swansong, the Brexiteers want to break Ireland and take it down with them.

(The video is also online at https://livestream.com/IndependenceLive/belfast-remain-rally/videos/182156767).

Thanks to Sorcha and Seamas for organising the event. And to hell with Brexit - it is not in my name...
Posted by Chris Paton at 13:50 No comments: