On June 23rd Scotland voted to remain within the European Union, in contrast to the result from the rest of the United Kingdom (with the notable exceptions of London and Northern Ireland). Despite our vote, we now find ourselves potentially on the point of being dragged out of the EU against our will. In the last two weeks, I have watched with horror as the value of the pound has plummeted to its lowest level in almost half a century, and as billions have been wiped off the value of stocks. In England the two major political parties are now in the midst of civil war, providing no leadership whatsoever in what can arguably be described as the greatest crisis faced by the UK since the Second World War. Elsewhere, in the aftermath of their lies and deceit to the nation, the arch-villains of the piece, Boris Johnston and Nigel Farage have simply run away to hide, rather than accept responsibility, whilst racist attacks have escalated dramatically towards many immigrant residents.

By contrast in Scotland, Nicola Sturgeon has stood up to the task at hand, reassuring our European citizens of their value and continued welcome in our land, whilst at the same time taking our case to Brussels, to preserve our position within the EU. The First Minister, with the backing of Parliament has a mandate to try to preserve our relationship with Europe. What forms this might involve have yet to be worked through, but independence is now once again another serious prospect as a means to achieve this. When asked if another referendum was on the cards, the First Minister replied that it was 'highly likely'.

Incredibly, much of the former Better Together side from the previous independence campaign have also now agreed that this is a serious and desirable possibility in the current circumstances. Sir Nicholas MacPherson, who only last year Alex Salmond was demanding resign from the Treasury, has written in the Financial Times of the very serious potential that independence now offers Scotland, a dramatic change to his stance in 2014. Author J. K. Rowling, who raised the ire of many in the Yes campaign two years ago, has also now conceded that independence is now likely, adding that her previous support for the union was never unconditional. Even within the Scottish Labour party, many MSPs are now seriously giving support to the consideration of independence as the likeliest means forward. Was I the only one stunned on the recent BBC debate to see Jackie Baillie so warmly supportive to the SNP's Fiona Hyslop in discussing the way forward?

Despite having voted Yes in 2014, I've never seen the point in blaming No voters for the result back then. However people might have voted then is actually irrelevant in the context of today's current political situation. The United Kingdom that existed in 2014, the one which we were told was a safer bet to remain within to keep us in the EU also, simply no longer exists. With Ian Paisley's son in Northern Ireland, of all people, now telling folk to obtain an Irish passport if they can, you know that something truly seismic has happened in the history of the UK. 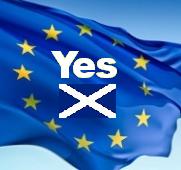 If Nicola is unable to find another means to preserve our EU status – whether through some form of 'reverse Greenland' scenario, or whether through some form of federal UK structure as proposed by Kezia Dugdale (albeit, something that was actually promised and never delivered through Gordon Brown's infamous 'Vow') – and an independence referendum proves to be our final recourse, the good folk of Scotland will need to seriously consider the question in light of the increasingly worrying circumstances we now find ourselves, namely a Little Britain now seemingly in free fall.